So far, the 2016 – 17 Flu Season is off to a slow start, according to the Texas Department of State Health Services.   As of week 48 ending December 3, influenza activity increased slightly from prior weeks but remained low in Texas and across the United States.

Schertz Pharmacy held a Flu To You Event recently offering the 2016-17 vaccine to patients at a reduced cost.  Dr. Stephen Dinger, Pain Specialist at Advanced Pain Management,  and Carlo Aranibar, whom you might recognize from our Schertz Pharmacy and Advanced Pain Management offices, set up a Flu To You shop right outside our Schertz location making it convenient for those in the medical community along Schertz Parkway and nearby neighbors to stop in and get vaccinated. 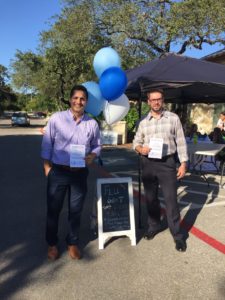 Some of our fabulous residents in the Schertz Community bravely allowed us to snap their photo while receiving this year’s vaccine. 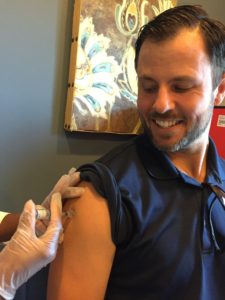 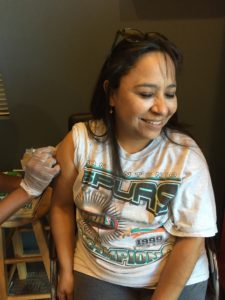 This flu season, Schertz Pharmacy is administering the 4-strain vaccine, which is recommended by the Centers For Disease Control.  The CDC is not recommending the flu mist or nasal vaccine as in years past. The CDC studied the results of the nasal vaccine and found it did not offer the protection as well as the injectable vaccine. 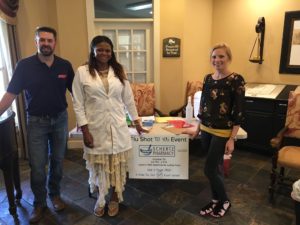 Our Pharmacists are able to bring flu shots to places of work or local businesses looking to provide the service for its clients or residents.

“As a local, family-owned pharmacy it is our priority to care for our customers which includes convenience.  If it is easier for us to come to you for a flu shot, we’re happy to do that,” said Dr. Stephen Dinger, who owns Schertz Pharmacy.

The flu season, though often on its way out by March or April can actually run through May.  Meantime, the Flu Vaccine and Shingles Vaccine are two of the more common vaccines provided by Schertz Pharmacy.

The pharmacy also delivers prescriptions and has the ability to do in-house compounding for topical medical solutions.