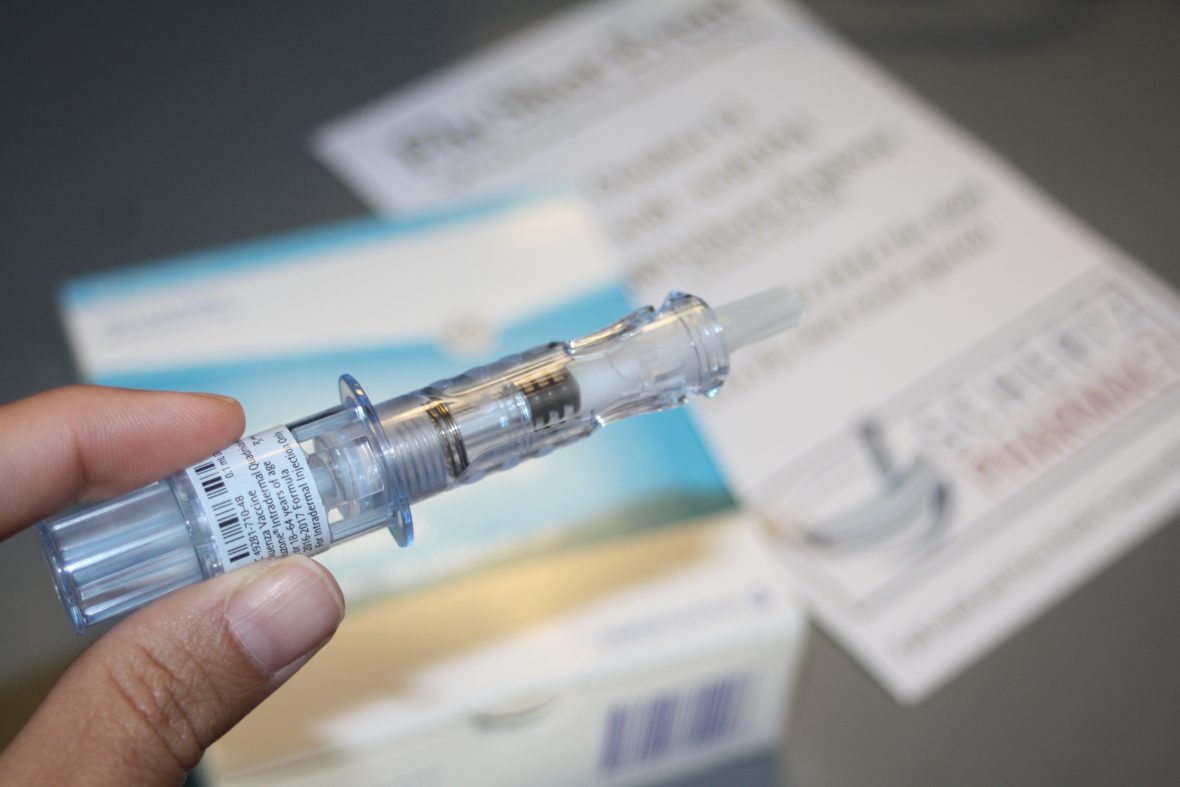 Two years ago, on the eve of my 40th birthday something just didn’t feel right.

My body ached and I felt extremely tired.  I was about to turn 40 after all, so aches, pains, and lethargy were nothing new.

However this was different.  The aches grew worse, and, I developed a fever.  All I wanted to do was lay in bed.

All night.  So there I lay, in bed, on my 40th birthday and the days that followed.  Suddenly, I noticed something disturbing.  Even as I rested, my heart beat extremely fast.  I felt ever more uneasy.  That’s when my family decided it was time for me to see someone.  Of course, it was a weekend. Because these things never happen on a weekday, when you can see your typical physician, right?  So off I went to my local Urgent Care.

There, it was determined, not only was I dehydrated and in need of fluids, I also had the flu.

Wait – hadn’t I gotten my flu shot this season?

That’s when I realized, through all the craziness that was my life as a busy working mom of three, I had, in fact, forgotten to get my flu shot.  My three kids had received theirs.  However, I failed to get myself vaccinated for the season’s flu. All I want to do is care for my kids yet here I was having to have my family now care for me.  Ironic, isn’t it?

So often, we adults, especially those of us with children, put everyone else first.  It’s expected.  Here at Schertz Pharmacy, owned by Dr. Stephen Dinger, father to three, we understand that.  So, this season, we have scheduled a special Flu Shot Event to make it convenient for families to fight the flu and feel good all winter long.

We will have a tent set up right outside Advanced Pain Management, near suite 400. 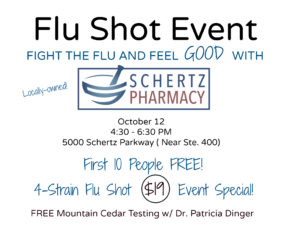 While most insurances cover the flu shot and people can pay little or no copay, we will have the 4-strain flu vaccine for $19.

The first ten people to register at the event for a flu shot will get it totally free!

As a bonus, we will have Dr. Patricia Gomez Dinger, Board Certified Allergist at Advanced Allergy, Asthma, and Immunology on hand for free mountain cedar testing! 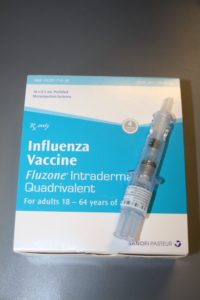 When it comes to the flu, it is recommended by the Centers For Disease Control that anyone over 6 months of age receive the flu vaccination.  Kids under four and those over age 65 are most at risk to dangerous complications that can result from the influenza virus. There is also a new recommendation this year against using the nasal spray, more commonly known as the flu mist vaccination.

“The CDC makes new recommendations with each new year,” said Dr. Dinger.  He added, “This year, the CDC is only recommending people get the injectable vaccine due to reports that the nasal spray demonstrated a low effectiveness  against the H1N1 flu in both the 2013-14 and 2015-16 seasons.”

Schertz Pharmacy has two variations of this year’s flu vaccine.  It has the Quadrivalent vaccine protecting against four strains of the virus.  Schertz Pharmacy also carries the high dose vaccine recommended for those over 65 years of age.  According to a new study here, the flu shot drastically reduced flu-associated hospitalizations by half, for people over fifty years old.  That’s pretty amazing.

If you’ve ever had the flu run through your home infecting several family members as I have, you know all too well that influenza is contagious.  Unlike a cold, however, the flu usually comes on quickly. Symptoms often include:

Not everyone will show the same signs of the flu, especially fever.  It is possible to have the flu and not show a fever.

It is important to note that there are also a few people who should not get a flu shot.  These people include children younger than six months, people with severe, life-threatening allergies to flu vaccine or any ingredient in it (this may include gelatin or antibiotics).  There are also special considerations for those with egg allergies which have changed slightly from last year.  You can read more about those modifications here.

Most of the time flu activity peaks between December and March although the season can actually last as late as May.